Scott Corfe, Research Director at the Social Market Foundation, explains why specialist older people's housing, including Integrated Retirement Communities, is key to meeting the needs of our ageing population - as well as reigniting town centres and high streets.

The UK population is ageing. The latest population projection produced by the Office for National Statistics, released earlier this year, show that those aged 65 and over will account for a quarter (25%) of Britain’s population by 2050, up from 19% today.

Despite this trend, the UK’s housing stock is woefully equipped to meet the needs of an ageing population. We have the oldest housing stock in Europe, not only making our homes costly to heat (a particular concern for the elderly), but also leaving many living in conditions that are dangerous as they become more frail. Falls are the most common cause of injury-related death in people over the age of 75 and have increased significantly over the past decade. And our housing stock often fails to provide people with a strong sense of community – over a million older people in the UK say that they are often lonely.

In a recently-published Social Market Foundation report, I argued that specialist older people’s housing provision should be expanded in the UK to address these issues, including Integrated Retirement Communities combining independent living for older people with care and support. Well-designed accommodation (such as with the inclusion of handrails, stairlifts, alarms, reduced trip hazards and elevators) and on-site care staff have been shown to reduce accidental injuries leading to hip fractures or, in the worst instances, death.

Further, there are substantial mental health and wellbeing benefits from specialist older people’s housing. The International Longevity Centre (ILC) found that a resident in an Integrated Retirement Community experiences half the amount of loneliness (12.17%) of those in the community (22.83%).

Some will baulk at the idea that we should be expanding housing for older people in the UK at a time when many younger individuals are struggling to get a foot on the property ladder. But this is not a zero-sum game. In England, two thirds of owner-occupying homeowners aged 65 and above are estimated to live in underoccupied homes, amounting to 3.6 million households. More specialist older people’s housing could encourage more older households to “rightsize”, freeing up larger homes for young families.

Furthermore, as we seek to revitalise our town and city centres as we emerge from the COVID-19 pandemic, new housing for older people could play a key role in supporting economies and jobs for younger people in sectors such as hospitality. Over 65s households spend over £170 billion per annum, amounting to over a fifth (21%) of all household expenditure. This includes £14 billion of spending on restaurants and hotels, and close to £27 billion of spending on recreation & culture.  Further, “silver pound” spending power is forecast to grow by 81% by 2030.

Taken together, these health, wealth and wellbeing benefits are likely to amount to a sizeable “older people’s housing dividend”. But the UK currently lags behind other countries when it comes to specialist accommodation for older people. Comparable data is hard to come by, but, according to one study from 2011, less than 1% of Britons over the age of 60 live in specialist older people’s properties, compared to 17% in the US and 13% in Australia.

How do we get to where we need to be? My report argues for a multi-pronged approach. An explicit target should be set for the number of older people’s homes supported by Homes England, and there should also be a review of government-owned land to identify sites that would be particularly well-suited for such housing. Local government also needs to play a role too, though planning policy and ensuring that local plans pay sufficient attention to older people’s housing.

Integrated Care Systems (ICSs) should also be brought in, building a more aligned and coordinated approach to commissioning and developing age-appropriate housing that facilitates health improvements – linking up stakeholders from the NHS, local government, charities and the private sector. Only through bringing all these groups to the table can we ensure that the wide range of benefits making up the older people’s housing dividend are considered.

The future is hybrid: the power of online in supporting offline community building 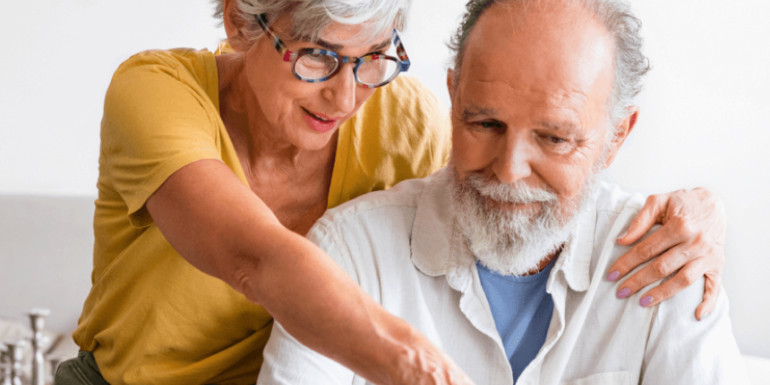 The future is hybrid: the power of online in supporting offline community building